How To Not Want To Drive: Drive In The Big Durian

Hning: Behind the wheels to her beat up Toyota Kijang, in Abaya and Headdress, fresh out of the Saudi embassy, sweating profusely, giddy from the congested traffic, running 20km/hr on her tenth hour of practice driving behind those awful hordes of cars and motorbikes from hell.

Instructor: Old man in his fifties, doesn't give a crap about neither car or driver, and is only thinking about what to have for lunch with his wife.

Instructor: Doesn't even look at Hning as he says: "Okay, honey, you seem to be doing fine. I'll leave you now for lunch." – AND JUMPS OUT OF THE CAR!!

Hning: Starts again driving because cars behind her are honking like mad.

Hning: Scratches a car, breaking one sign-light, muffling protests with a blue Indonesian banknote, and hollering apologies at the car owner.

- April 06, 2008
Email ThisBlogThis!Share to TwitterShare to FacebookShare to Pinterest 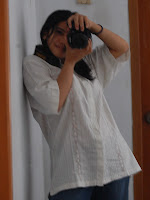 Being stuck with a writer's block is partially blamed on the existence of this blog.

And in the last few months, she hasn't been erratic, crazy or generally nuts enough to recognize her own writing voice. Her thoughts haven’t been as critical as it used to be.Her feelings hasn't been strong enough to stir an A or a B or a Z, much less and entire sentence. And forget about all the dirty, sublimated ideas and behavior that used to fuel her creativity, because she's as dry as a camel's hoof in a bright Saharan !

It's not that her world has been less than over-stimulating. Ever since she's been retrieved from Aceh, she's been doing things that a "jobless" person wouldn't normally be doing. Like having a four-days international exhibition for a company that she never knew she had. Or commuting back and forth between , and within a single month, for a number of times. Or learning to drive in accident-prone . Or having her senses tweaked so sharp that she can start seeing real demons.

(…and here we thought that Hning is becoming less crazy-er than before, eh?)

Back to blaming this blog for this writer's block again.

Hning thinks that the things that she has been thinking about have slightly moved into different areas of interest. So much that the labels in this blog, or that the persona that Hning has been created for, doesn't seem to fit very well with the market of readers and the style of writing that we’ve grown accustomed to.

And she still needs to write.

So, for a while, Hning was tempted to start a new blog. You know, cheat on the whole developmental processes ; act like: "Hey, I've always been like this!", start an entirely new ID, develop a different branch of insanity.

But that's what people would do when they want to bury their past and forget. And Hning doesn't really want to forget. Or hide. Or start anything new.

She's still experiments with her life. Still gets bothered with the typical things that children and superheroes would bother about (yes, injustice and poverty and ignorance can should bother everyone until the world is alright again!!). Still smokes like a chimney and drinks coffee by the liter. Still turns pink and wags her tail furiously when you tell her that she's pretty and that you still love her.

She's just been stuck with a writer's block.

Maybe it would still amuse you too.