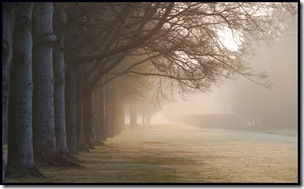 In all fairness, she didn't ask them to come and hold a cryfest with her.

Actually, Abu Bakr and Umar visited Umm Ayman to relieve their own grief and longing for the Prophet, following something that he used to do.

Repetition of habit is a way of remembrance, isn't it?

So when she started weeping, the companions reminded her that the prophet was in a better place.

She nodded between sobs, muttering "I know, I know. That knowledge brings me greater relief than anything else in my loss." Then shook her head, " It's the end of the revelations, the voice of God through the Prophet that made my grief linger."

It was that, the sense of irrevocable endings, that made the two companions weep with the Prophet’s old nurse.

Then they heard it.

Shy at first, barely nudging its presence between their sobs, but they heard it, nevertheless. Its clarity and calm decisiveness contrasted their emotional shambles, and brought them upright with urgent attention.

Suddenly the room was crowded with generations of future and past ghosts. The ghosts of the people who have died to uphold their practice. The ghosts of fore-children who were going to miss out on the Prophet’s teachings had it not been grounded into the living. Today.

If most of the ummah remembered how it felt to have a prophet amongst them, how, then, would the unborn remember?

If it was bothering the woman who knew the Prophet the longest, it surely would have bothered the rest of the ummah.

And they each only had a life time to spend. And it was going to be one worth spending; because they knew how it felt to be at loss, to grieve. To swing between love and hate, darkness and light.

On taking leave from Umm Ayman, they wondered between them, “Did you hear it?”

“In the pause between sobs? Yes, indeed.”

“What do you think it was?”

Umar’s voice deepened, “The weak might confuse other voices with…”

“That’s what we need to work on, isn’t it? Straighten the lines and set the foundations. As long as the ummah sticks to those, we can hope for the best in the voices that they will hear, when they find themselves in moments of calm respite. That is all that any teacher can hope for from the unknown.”

It was one of his better days. The house was turned inside out in preparation for festivity. Someone was getting married. The air was crisp and friendly. And the Master had actually allowed more than a crack of smile to pass his lips.

It was definitely a good day. The girls felt it. The servants too. The Master's delight touched everyone. He had been down under for too long, ever since the revelations went on hiatus. And for today at least, the veil of despair thinned and the household bustled with relief.

She took courage in these promising signs. Might that crack of smile widen into laughter? Or last a while after? Why can't it reach and reverberate to his heart? Albeit its thinness and brevity, might it not hold him with hope until the rest of him follows afloat?

When the domestic rush lulled and they found each other alone, she approached him. The hush was so sudden that he could have heard her thoughts. He felt it too, that slight lift of air in his surrounding. The kind that settles deliberately to let a woman ask her man what she had already known but needed to hear again.

"What are you thinking?"

And he held her in his gaze a while, feeling the weight of a fine-hammered woe hang between them with calm despair.

"How lucky, how happy we have been, Madam."

She tilted her head slightly, listening into what he was not saying. He dropped his gaze, blushing at her attentiveness.

"I mean, look at us, and at all that we have. The past messengers - their messages carried an air of urgency. There was a desperate necessity in their work. Moses had to save the Israelites. Jesus was the epitome of miracles. David, Solomon, Lot, Jonah, Job...they all had an important message to pass on. What business do I have with messages? A poor, illiterate orphan, who just got unbelievably lucky by marrying you."

He paused to indulge in a husband's pride, drinking in her feminine reaction to his words. The intimacy did not last; it quickly soaked with guilt. And despair clouded his eyes again.

"Do I really have anything to say to the people, Madam? What, the few nursery verses would do the job, you think? It has been so long since the last time I felt that Presence, I might not even recognize its arrival again.” His voice rose a pitch, “Maybe there isn't anything left to say or do and we should all just be happy!”

The mistress did not answer. Her gaze broke and drifted towards the house. The servants sweeping out the dust. The morning light breaking forenoon. And she heard him sigh.

He shook his head and shifted uneasily on his feet. He was about to go under again. She chased his despair.

“And if that is all that you can do,” she said, “then do it. Do it every day. Maybe that is your message and what you’re supposed to convey. If God and the angels and every man on earth forsook you, then you don't forsake your own calling.”

And that was how the long pause in the revelations ceased. How the Forenoon was inspired. How the work revealed itself over and over again. By being grateful about what is good in life, and helping where one can.

Every forenoon, ‘till Kingdom come. 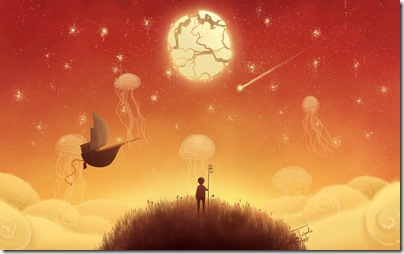 His wife spread her blanket and her arms around him. And held him. Tight into her bosom. No questions asked. Until his fever abated and his words flowed.

Then he told her that he might have seen a demon. But it was not a common demon, he would have known that by now. This Being had an uncommon, eternal grace. And that it held and spoke to him in words that jolted his sanity.

"You told him that?" She smiled, amused that her husband, despite his fears, managed to reply thrice that he could not read.

"It's the truth, isn't it? I can count, ride a camel and sell at profit. I can do a lot of things, but I can't read. Why should I admit otherwise?"

Her smile broadened, "What else?"

Then, he said, the being held and filled him with endlessness. Like something inside him, his very soul was torn and whitewashed with infinity. He thought that it was never going to end, or that it was only for a minute. And that he was losing his mind.

And she laughed. And he thought she was mocking him, but her laughter rang with kindness.

"Darling, if it's any news to you, then it is that you would be the last of all people to be cursed with insanity. Come, let's ask for counsel. I don't think that you would take my word for it, but I'd rather take this as good omen."

One the way back from the counselor, he asked her and his voice heavy with grief. "Do you still think it's a good omen?"

And she offered him her brightest smiles yet, "What, that you have got your life's purpose defined for you? You realize that men your age are usually struggling with middle-age crises, while you just got promoted. What's not good about that?"

He halted, and tightened his hold on her hand and searched her eyes. The longing crushed them both. "It will cost us everything we have ever had and known. Every. Thing."

"Then,” said the good wife, “It's a good thing that we do have that much to give."