The Prophet once said that, if you don't like something, change it with your hands first, then your mouth. (And if all fails, by all means, keep your mouth shut.)

One of the reasons why I'm so happy to work with my hands (and my mouth shut) is because my hands seem to make a more sustainable difference than my mouth.

I honestly enjoy making people writhe with pleasurable pain when I give them a massage. I enjoy seeing a neat pile of anything I sort out. I enjoy writing, because it's something that comes through my hands too.

Even the satisfaction is more real when the work comes through my hands, you know?

Our hands bring forth the fruits of our hearts and minds. Bless our hands, writers, cooks, builders, drivers, hairdressers, maids, surgeons, mommies and playful daddies, for the good things we do with our hands, make the deepest impact, carve the deepest memories, and affirm the deepest faith. Amen.

What good things have you been doing with your hands?

- July 15, 2010
Email ThisBlogThis!Share to TwitterShare to FacebookShare to Pinterest

I've been too happy to blog.

Blogging Writing had been my way of expressing dissatisfaction toward Saudi, family, society, work, fucking every and anything. Since I became happy(er), I kinda lost my drive to write. That's a dear cost for happiness to take.

I had to be happy now. There's so much dissatisfaction a girl can take in a life time, you know? I'm getting too old, too sober and aware of the shortness of my time on Earth to be unhappily dissatisfied, even for the sake of writing. It's about time that I welcome some joy in my life.

I'm talking about the simpler kinda happy. Not cackling victory, or gleeful laughter, or absolute absence of grief. Just happy. Just seeing the world as it is, and still finding happiness. Just looking at my failures and flops and still be happy anyway.

Then forgive myself for indulging it.

Feelings are contagious, see? We infect the people closest to us with our feelings. It's just the watery way we are.

I want this kinda awesome to spread. Which is why I started writing blogging again.

I want you to -- at least -- smell happy when you read my writings. I don't know how people can be interesting without scandalous headlines and gossip juice. I don't know how to translate this calm, quiet kinda happy into writing.…but I plan to figure it out, and you're most welcome to join and wonder along.

…as long that it makes you happy too.

- July 10, 2010
Email ThisBlogThis!Share to TwitterShare to FacebookShare to Pinterest

Untie is an article addressing the over-tightness of Saudi families. I would like to state for the record, that even though I think that you were so eloquently sexy in that article, Omran, I also think that YOU'RE WRONG and you're missing huge elephants.

In fact, families in Saudi are separated. Sex-separated, that is.

If having to go through life's milestones without your loved ones doesn't look like a broken family, then what does?

My mother couldn't witness my brother's wedding vows because it's an all-men ceremony. Even at the wedding reception, she can't really see her whole family celebrate together. Not really.

Sex-segregation or none, how about giving "family" its working definition? As family, we spend our days together whether good and bad and awful. Family members give each other first row stadium tickets in each other's live shows.

Because grief and joy are sexless and, in milestones, it's our family's approval we seek and fear, no matter how big a crowd we show for.

Taking away the right to be each other's witnesses is a dirty, emotional rip off. Aren't graduations, weddings and funerals the most important events that one would hope to go through together as a whole family?

I could care less if it's a grand wedding or Reverend Elvis in Vegas, when it comes to milestones (pinnacles of our everydayness) you can't just segregate loved ones from each other based the contents of their bras and briefs... It's just wrong.

Thou shall not remain a family when the crowd gets too big.

If Saudi hails itself as an Islamic country, where have the Saudis seen a hadith or Quranic verse that said: ولا تختلطوا. Where was there a religion in the world that said, thou shall not work and speak and mingle with the opposite sex?

I would love to know who came up with the idea of sex-segregation in Saudi (among other things). Because the bedus in the desert don't practice this kind of segregation. There's a sheet between where the parents and children sleep, but the desert and donkeys and darlings are together in joy and grief and scandals.

I heard that, in Jeddah, they're supposed to be more advanced than the bedus. I guess, even now, it can only go so far as the privacy of our Saudi living rooms. 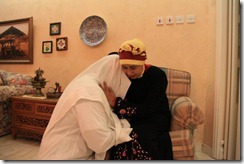