"Man's 'progress' is but a gradual discovery that his questions have no meaning." ~ Antoine de Saint-Exupéry

Sometimes I worry that if I'm not writing, I would cease to exist.

When I can't handle the thought, I push it: I babble and publish anyways. Then slump in regret at the wasted .html spot, and delete that awful show of mediocrity.

I can’t help but believe that writing is the only way that I can leave a trace behind. Can't you see that I'm building my memorial?

Worse than trying to become immortal is being immortally remembered for crappiness. Every part into writing this had to be sequined with elements of perfection. Written at the sweetest pace, in the company of the finest espresso and kretek; sipped and whiffed with leisurely, arthritic slowness.

By the time you read this, I'll know that it won’t do me justice and I'd have to repeat the process all over again. Until some meaning sinks in.

Someday, I’m going to quit bothering so much and admit that fear is just another way to move your bowels, man.

- August 29, 2009
Email ThisBlogThis!Share to TwitterShare to FacebookShare to Pinterest

"Variety is the soul of pleasure." ~ Aphra Behn

Incest is naturally repulsive because humans have MHC genes. MHC "controls how the immune system recognizes and fights off microscopic foreign invaders such as viruses, fungi and bacteria." [source] It is also responsible for mate selection. When you perspire, your MHCs mix up with the bacteria and fungi, creating your individual bodily odor.

Similar MHCs create similar bodily odors, and vice a versa. Now here’s the golden nugget: Studies suggest that people are more attracted to people who smell more different than themselves. This explains why siblings or parents and their children, sharing plenty of similar MHCs, do not get sexually attracted to each other, and why interracial couplings can be so sexy.

Now, in the case of the xenophobic picky endogamous Saudis that SaudiJeans and Precognitive were referring to here and here, we’re looking at examples of people who LOOK LIKE they’re pulling the plug on themselves in the genetic survival pool. Discovery Channel calls it a genetic time bomb for good reasons: when people of the same genetic pool mate and reproduce, they “are 13 times more likely than the general population to produce children with genetic disorders” [source].

Not to mention a marriage with plenty of sexual disinterest towards his odorly-similar wife (unless, of course, the wife is not his main source of sexual satisfaction -- and that’s beside the point).

Here’s where I’ve been holding myself to say and delightedly failed to do so. If endogamous folks are more comfortable fishing in their own genetic pools, does it also mean that out there they would not make it far? Does it also mean that the rest of us are safer from being genetically crossed with their stupid elitist ideas of survival?

If so, I think we still got the better end of the deal, so far.

Thought it’s been a while since the last time I flexed THAT muscle.

- August 24, 2009
Email ThisBlogThis!Share to TwitterShare to FacebookShare to Pinterest

"Language can only deal meaningfully with a special, restricted segment of reality. The rest, and it is presumably the much larger part, is silence." ~ George Steiner

"There is no agony like bearing an untold story inside you." ~ Zora Neale Hurston

With Yoga (and basically every form of meditation and solitary exercise), you're screwed. At a best, you can't twiddle your thumbs, or turn up the volume, or even shrug fashionably, at worst, you wallow in all the thoughts you can’t subside.

For all of the good reasons above, I hadn't done yoga in almost a year. Or maybe even more than that, since Sue, my yoga teacher, left (Sue, if you're reading this, I’M SORRY).

Unfortunately, I was already in my third yoga pose when I remembered why I stopped doing yoga for so long. It was a bit too late to jump ship because I was already crushed under a pile of overwhelming thoughts, and a pinch too close to a full-blown cry-fest.

[I was thinking, in no particular order, "Dad's here, I should go and see him, but he's not going to approve of me, and he's going to start judging me and we're going to start one those arguments about the way I dress and the way I talk, and barely got off the depression from going through all of that with mom last week..."]

Around the part where my knees gave and I said "fuck this" and started sniveling, was when I STARTED HEARING THINGS.

" and speeches about it, and half of the schizophrenic residents in any mental asylum have had experiences with it too.

The difference between crazy and celestial is in the quality of that Voice. A Voice that is still mine, yet sharp and decisive and atypical of me for its coherent precision.

It said, "THE ONLY WAY YOU CAN GET HURT NOW IS BY QUITTING.”

Nothing philosophical that would break my session with “Huh? What?”. Nothing too brief to fail its purpose in pushing me forward: I got up, did a Tadasana - a stand-correct pose - and managed to do all the other poses allotted for the day's session.

Every time my flow jagged and thoughts reemerged, the Voice cheered without becoming annoying. It said things like, "This is going to make you feel better. One more asana. The elongated triangle pose. The Parsvottanasana." - Hey, I'm thinking in glossary terms! - "Breathe. Breathe..." and then, NOTHING.

The Silence, what's so unfamiliar about it, didn't feel like a pause between thoughts and poses. It didn't come because the Virabhadrasna II demanded more concentration. Didn't feel like it was jammed into my head like SHOCKING CAPITALIZATIONS.

It felt like an encouragement, a gentle nudge, coming deep from within, and connected with everything else: the floor, the room, the house, the guests that the Timekeeper was receiving and even the Void.

The Silence wasn't an emptiness; it was not not-knowing what to think. It was not a blank state. It was just there. It was what Yoga, being in the moment and acts of worship and not breaking your fast for a cigarette and exercising, is all about.

For as long that it lasted, at least.

After the final pose, while heading to the shower, I donned my leisurely self-hating thoughts again. I was "that loser I've been so afraid of becoming" again; the failed project amongst my siblings, the quirk who doesn't seem to optimize all her potentials.

And I was fine with that. It's not like a single Yoga session could fix a lifetime of issues, or even a light bulb.

The only difference is that, before that particular session, I didn't know that I could actually take a break from all my failures and accomplishments and blogger's blocks. A break, man, not a vacation, not a chocolate bar, not a rant or a moment of reward.

Cynically speaking, I might have been so afraid of my thoughts that I JUST HAD TO DROP THEM, to shun everything else in desperate attempt for consolation. Isn't it why I don't live conventionally?

Then again, even unconventionally, I'm not detached from what I want, and what the world wants of me. Living in a calm environment doesn't necessarily induce peace, right? Something is always buzzing in my head with articles to write, things to do and WORLDS TO CONQUER.

Yet it all came down to that first sentence the Voice had said, that the next pose is the only thing that mattered then. When I started listening and my mind tranquilized. When variables didn't matter, and my life's purpose was simple and one-pointed.

Maybe that’s what Mother Teresa meant when she said, "God is the friend of silence. Trees, flowers, grass grow in silence. See the stars, moon and sun, how they move in silence." - A glimpse of God.

- August 18, 2009
Email ThisBlogThis!Share to TwitterShare to FacebookShare to Pinterest
Labels: on yoga

"I was just thinking of having Anggi's drink, then I remembered that he's been sick and coughing like an old dog. He could be carrying the pandemic for all we know, which might result in both of our untimely deaths. Then again, I continued to think, what's so unnatural about dying that would stop me from teasing my brother blue?"

"You're right, that is morbid. Why are you so fond of death?"

"I’m not. I was scolding myself for my reluctance. There was a time when man lived for centuries, and he still failed to take life by its horns and make the most of it. I’m already at odds here: Anggi lives in Jeddah, and I live in Jatibarang, and we barely meet once a year. Who knows what it’s gonna look like next time we hangout? I’m just saying, enjoying my brother is something worth taking risks for."

- August 11, 2009
Email ThisBlogThis!Share to TwitterShare to FacebookShare to Pinterest

If you keep inventing excuses rather than solutions, and you keep saying “but” and “later” and “what if”, then maybe you don’t really want to reach your goals.

You don’t deserve to have your dreams come true, if "sleeping on it" is all that you do.

- August 06, 2009
Email ThisBlogThis!Share to TwitterShare to FacebookShare to Pinterest

[When the family came, they brought along elements of their Saudiness to remind you what you could have become if you agreed to go back with them. You could have become, they hammered, something bigger, flashier, more majestic than a hermit. It’s sadness for their dissatisfaction that brought you the Timekeeper for guidance. And he told you to sleep on the thought. So that your hearing may improve.]

Once, said the Timekeeper, there was a peculiar foreigner who decided to leave his home and family. He got in his car and drove it until he ran out of gas. Then he left the car, knocked on the nearest house he found, and lived in that town since then.

Did he know the people there, in that new place?

Why did he go there?

Because in he thought that the people back home were the ones living on the wrong. And, because he had to answer a calling.

Where did the call come from?

It’s gotta be the Lord talking if you can’t deny that kind of peaceful clarity and resolution, kiddo.

His people must’ve thought that he were crazy to go.

He left anyways, with something that can be diagnosed as an audio-hallucination as his only guide and confirmation. Is that alright? Is it right to do that?

It can be. The Lord had said, ✿"They (angels) said (to them): "In what (condition) were you?" They reply: "We were weak and oppressed on earth." They (angels) say: "Was not the earth of Allâh spacious enough for you to emigrate therein?"✿ [HQ 4:97]

Do you want to go back?

Has the calling ended?

That’s for you to know, child.

This choice costs a huge sacrifice.

Do you think it’s worth taking if I am content with myself, with what I’m losing and what I don’t know? Is this Heaven?

Related articles on Unconventional Living:
- August 03, 2009
Email ThisBlogThis!Share to TwitterShare to FacebookShare to Pinterest
Labels: on being a witch 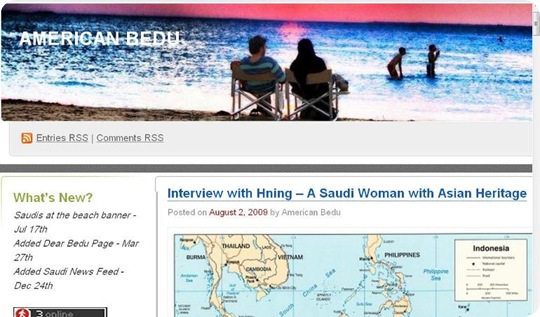 "In all my writing I tell the story of my life, over and over again." Isaac Bashevis Singer

I filled up an interview slot in AmericanBedu’s blog: Interview with Hning – A Saudi Woman with Asian Heritage.

On her post, you’ll find answers to these questions: