"To think of the part one little woman can play in the life of a man, so that to renounce her may be a very good imitation of heroism, and to win her may be a discipline!" - George Eliot, "Middlemarch" 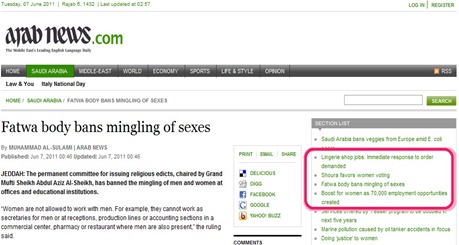 In Saudi, where men fear revere her effects in public, the woman's initiative and willingness to lose whatever the guys think as privileges is gaining momentum at creating that sustainable social change in Saudi. So even though Manal As-Shareef has passed on the torch and promised not to commit social suicide drive in Jeddah, the media (a.k.a. King and Mufti) is on guard of her sex's wrath.

On one side, Arab News covers the fatwa banning the mingling of sexes in public offices. On the other, we see consolatory efforts on soothing the woman's wrath: Women working in lingerie shops, encouraging the barely effective right to vote on municipal elections, and a boost of 70 thousand jobs for women.

If we can ignore the procedural difficulty to have 70 thousand adults working productively in segregated sections of the workforce (hence employing 70 thousand men to represent and drive them to work and back), ignore that bribery bubbles always burst can only slow the inevitable, I can't help but feel positive imagining the conversations in the mixed family/female sections of Saudi.