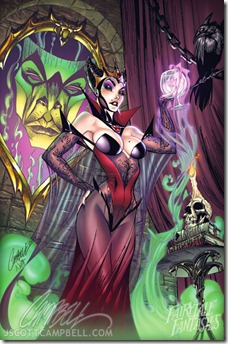 When she asked, "Mirror, mirror on the wall, who's the fairest one of all?"

"You are, my love," said the magic mirror. "You are the fairest one of all that has ever reflected upon this ancient glass of thine."

"You are. You are, my queen, my love and fairest one of all."

The mirror's answer did not change when she needed solace in her childhood. Or when the insecurities of adolescence washed her with shame. Or when she donned her wedding gown, when she mourned her husband's passing, or when they crowned her as queen regent, on behalf of the crown princess, Snowdrops.

Every time she asked, she meditated on its answers. There was a patch of silence in her days reserved to process what the mirror had to say about her behavior and outward appearance. She might have known the answer, but it made it all the better to hear it in the clarity of engulfing silence.

Besides, it was easier, she noticed, to correct fresh mistakes, than old scars. So the queen made it a point to look into the mirror often.

Ever the faithful and sincere and loving, the mirror said, "You are, my love, the fairest one of all."

But, lo, as ultimate ruler of the queendom, she allowed herself to be taken by the bustle of sovereignty. The affairs of the country are more demanding to her attention than mirror meditations, she argued.

And, for shame, the mirror went deeper into the realms of forgetfulness; right when its master needed its advice the most against the ultimate temptress. The queen forgot that power does not corrupt suddenly, with thunder and clamor. It gnaws its corrosive grip upon the soul gently, seductively; catching its targets unawares with countless unnoticeable small decisions.

"How many are invited to the banquet? What, only 1000? What will the noble kinsfolk say? Invite 10'000!"
"How much are you betting? Ha, I'll raise you twice that much."
"Who cares what the farmer thinks? Just bulldoze the damn house and build that summer palace."

Until one day, after years spent in the deepest part of the queen's wardrobe, on the event of clearing it to make more space for shoes, they found the magic mirror. Dusty and bitter with neglect, it spoke years of small bad decisions, far too many that it took a poisonous apple, a death, a long slumber and a forgiving kiss for all mistakes to be repaired.

Far too many that, when it was Snowdrop's turn to be queen, she made it a point to attend a daily audience with the reflective Silence, lest she be caught unawares of small mistakes that have would have gnawed too deep to be uprooted. 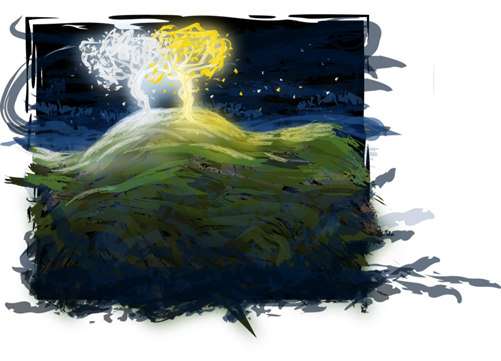 I had guessed how long she practiced from where they had placed her (way at front!) in the meditation hall. Hence, as soon as the silent vows were lifted, I picked her to annoy for guidance: "You've done this so many times, hasn't something changed in you?"

She looked at me compassionately; not a strand of her platinum hair waved.

I blushed. "Of course it has. How silly of me to ask that. Allow me to rephrase my question: did it take you away from the original faith that you were raised in?"

She said, in classical Rogerian terms, "What matters is, what it has done to yours?"

A kaleidoscope of cultural upbringing, brief Atheism and lewd mortal tendencies flashed quietly between us, before I said, "Islam was taught to us in vulgar tongues; it was always either hell or heaven and magical beings being transported between the worlds. Meditation has helped me understand Islam's subtler meanings."

She smiled again. Understanding. Or maybe just detached from what train of thoughts I was going through.

I asked her again, "Don't you get bored of repeating the same stuff over and over?"

"You're a yoga practitioner. Don't you get bored?"

I grinned. "The true teacher is the practice itself, huh?"

At another table, I heard a first time student speak vehemently about her meditation experience. "I felt incredible itches all over. You know what that means don't you? Ask that lady over there, she is a psychic in the magical matters of the meditation. Bet she can even guess the age you'll die in! I saw a DEMON HOVER ALL OVER ME!!"

I felt my head hit the table in front of me.

Alas, it isn't the practice that is subtle or vulgar. It was never the method, place, texts, prophets, goddesses or any of that crude signs of awesome that raised man his dignity and honed his merits and honored him with heaven or hell.

It had always been something beyond all of that, hadn't it? Something that all of us, if we waited and practiced long enough, will eventually understand, believe and fail to explain in more than a compassionate smile.

- January 10, 2012
Email ThisBlogThis!Share to TwitterShare to FacebookShare to Pinterest
Labels: on being a witch 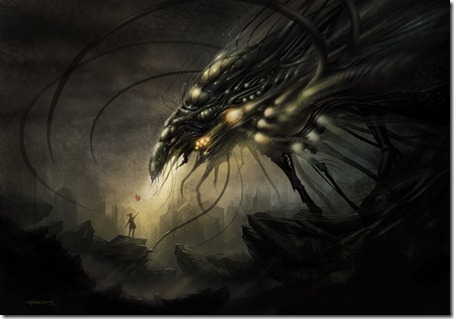 In the beginning, between 2500 BC - 1000 BC, God was presented in the flashiest forms: Global warming. Burning bushes. Absolute reign over man, demon and weather. Infinite wealth. Oceanic division. Etc.

It worked in convincing man for as long as they remembered. As soon as generations elapsed…the prophets had to start over again.

Then almost simultaneously, between 500BC and 30AD, Plato, Buddha, Confucius and Jesus agreed, "Okay, since flashy miracles don't seem to work in enlightening man, let us limit the scope of miracles to man himself."

So they taught that man is God's miracle. His birth, life, thoughts and death are all miracles.

Finally, the masters said, "You know, let's just take away all crystallized signs of miracles. Let man find the magic in brevity, in what flows."

And they left man with each other's actions: what they said and did to one another as the remaining sign of God's presence on Earth.

- January 08, 2012
Email ThisBlogThis!Share to TwitterShare to FacebookShare to Pinterest
Labels: on reading

This is an expression of belated well-wishes and BIG LOVE for everyone, and especially for Triesti and midget's shared sweetheart, good ol' Colson. 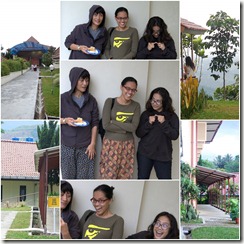 For midget's aunt, Myra, this had been her first time on a meditation retreat. Myra seems to have come out of it okay, but just in case, the Timekeeper was the one who endorsed her enrollment, so if anything broke in auntie, Mom, it's his fault.

As for Triesti and midget who have done this before, the ride had never been so smooth. It's a wonderful shock to find that it no longer hurt either body, mind or wallet to meditate intermittently for 11 hours, from 04:00 until 21:00, every day.

At home, though, the zombification side-effects from practicing monastic vows of silence and lifestyles started to show: Midget lost her house keys, forgot how to type and spent hours staring at the shower knob, trying to remember how to turn it on.

Catching up with Triesti, who reported similar experiences, they decided to postpone all high-level mental activities (including showering) until they recover more psychomotor coordination & psychosocial skills, and concentrate on cursing fucking EATING MEAT for a few more days.

- January 04, 2012
Email ThisBlogThis!Share to TwitterShare to FacebookShare to Pinterest
Labels: on being a witch, on meditation
Newer Posts Older Posts Home
Subscribe to: Posts (Atom)