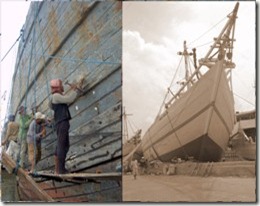 Mubarak's resignation is only so good for as far that he's there to be blamed for Egyptian unhappiness. Because decades after the euphoria is gone, and you wake up still hungry and unemployed, you'll wish there was a Mubarak, or invent another Mubarak, to blame for your unhappiness.

We know this because it has happened before. So many times before. The fall of a tyrant doesn't guarantee the people's happiness. Heck, barely guarantees their meals. Ask the French during the Reign of Terror after the fall of Antoinette's head. Ask Sumiati, twelve years after the fall of Soeharto's regime.

News flash: After the fall of a tyrant, people would still hungry. The unequal distribution of wealth shall maintain. And to those who're still hungry, you barely could sell the idea of a God if you don't bribe them first with a decent lunch.

Freedom, justice, dignity…man, these are great ideas that can't bring the food home. Subjugation, humiliation, oppression aren't so bad if you can sustain your family's basic needs through honest work.

The common folks are cool at attending prayers because it's a habit. It's a habit to stand up in lines. It's a habit to respond to commands spoken loudly, authoritatively (adzan, preacher's voice). It's a habit to discuss and converse afterwards what the sermon was about and then move along in thoughtful hope. En masse.

In real life, the habit to comply is necessary to sustain those fragile and relative eight hours of freedom. We realize that the poor spend more hours on labor, with less chances of achieving their ideal selves. The poor actually got lesser time to spend on choosing which ideal self they got to be. They can't afford thought.

And that, the freedom from thought, is the poor man's good fortune.

And that's okay too, you know? Because there is always honor and grace in labor. And that's a promised reward we give ourselves, every time we are done with that one-more-shirt-to-fold.

- February 12, 2011
Email ThisBlogThis!Share to TwitterShare to FacebookShare to Pinterest 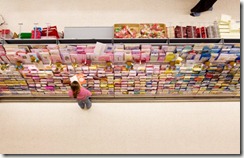 Let's say that these are the basic needs for sustained survival:
- Clean air
- Clean water
- More or less 2000 calories of healthy food intake
- 8 hours of Sleep
- 8 hours of labor
- Enough environmental security to maintain all of the above, a.k.a. home, bed, cleanliness, political stability, social intimacy, etc.

Anything beyond those are "wants".

In a 24 hour day, if 16 of those hours are spent on sleep and work, that leaves us with 8 hours of relative freedom. That leaves us, a.k.a. the middle class with internet access and time to spend on reading blogs, with relatively 8 hours to spend in practicing religion, making elaborate tantric love, choosing what to wear and eat and play, standing in lines, immersing in hobbies and be creative.

Beyond the necessary needs for survival, we have choices in spending those hours of relative freedom. Those 8 hours in a day add up to 56 hours/week, 2912 hours/year. If it takes 10 thousand hours to be a great at something, how have we spent our 8-hours-a-day-of-freedom for the last five years?