1.     Readers will read. Regardless to format or income or legality.
2.     Something to remember: The Prophet was illiterate.
3.     The first verse the Prophet received was: “Read.”
4.     You don’t have to finish every book you’ve started. Time is valuable, books are endless. Even if you’ve spent thirteen hours trudging through the Infinite Jest. When it’s time to quit, quit.
5.     Guilt is a useless emotion. There is only one course of action to deal with it: Learn. Move on.
6.     Sometimes it’s alright to trust the Bestseller lists.
7.     Not a lot of books on the bestsellers lists have the power to educate, entertain or express eloquently. That said,
8.     Even some bad books have something to teach. Even if the only lesson they teach is “How to write a bad book.”
9.     There is no such thing as wasted time reading great literary fiction. The most obvious effects from reading well-written fiction is the changes in the quality of your thoughts. The second best thing is the quality of your conversations. Hence, the improved quality of friends you keep. (Three cheers to the Sekuts.)
10.  Minds evolve with books. The more books you read, the more you know. Eventually…
11.  The more you know, the richer a heart you grow. A rich heart is visibly less bored, never lonely even in solitude. (This is why readers make highly-adjusting world travelers.)
12.  Some books have the power to reassess the way you look at the world. You're generally fucked when this happens. Fucked and very lucky to bask in that renewed sense of wonder.
13.  If you only have space for one self-help book for the rest of your life, read something written by a formerly Jewish Atheist, whose hypotheses on happiness are firmly based on religious script and social sciences. If you have room for THREE self-help books, read something by a Nobel Prize winner and this thing by a Stanford University lecturer. All three books honor the biology of human behavior.
14.  There is no point in overdoing the book recommendations. You need to find your own groove in the world.
15.  Intelligence is overrated. More powerful than IQ is the compassion to say NO to a lot of things. Saying NO takes muscle. Muscle takes practice. You get where I'm going?
16.  Reading is a skill; it can be learned. You can train to read faster, or deeper. You can train to read from audiobooks, ebooks and on the go. You can learn to forgo paper books and social media because you know your limits and priorities. You can might never get used to the sacrifices you make in order to keep doing the things you love. But you do anyway. Growing up is a skill.
17.  It’s not about quantity of books. It’s always about quality and your relationship with the books you read. It’s about what you do with what you know that matters.
Books I've read in 2016.

- January 01, 2017
Email ThisBlogThis!Share to TwitterShare to FacebookShare to Pinterest
Labels: on reading


Couple of years ago, I wrote a series of blogposts, trying to understand that elusive creature: The Reader.

I was trying to motivate myself to write my sub-sub-genre literary stories. When I learned who and where my ideal readers were, I relaxed. Instead of trying to write, I found out that reading could almost be just as good. I kind of said,
Fuck writing. Let's just read and see what happens.


Read I did. In hundreds and hundreds. Every day. For two years. On every book format. From every field, even those that obscurely made sense. And with jealous possessiveness for all the books I have not yet read, stacked and saved and sorted in boxes, ebook readers, MP3 players, phones and computer screens.

What relaxed my overachieving drive to write, and pumped my overdrive to read, was the realization that when the student is ready, the teacher will show. That when readers are ready, the books will be printed and reprinted, distributed and hoisted on shoulders and bandwidth, voiced through and in spite of brick and censorship barriers. When readers are ready, there will be no law too restrictive or expense too high or income too low.

Then, and only then, I read "Fahrenheit 451", and it said: "You can't make people listen. They have to come round in their own time, wondering what happened and why the world blew up under them."

Like, it took two years for me to finally find the book that verbalized a vague belief about why it doesn't matter who reads or when or how. That when someone is ready to ask that very specific question, she would have already been stung with the wisdom that'll allow her to swallow the truth. That there will be someone who'll whisper to her that very passage, from that particular book, through that secret, soft spot.

That "The most important single thing we had to pound into ourselves was that we were not important, we mustn't be pedants; we were not to feel superior to anyone else in the world. We're nothing more than dust-jackets for books, of no significance otherwise."

This writing? I'll probably share and link the heck out of it on every social media I'm part of. I can't just let a good story pass through me without tapping on the social spheres. But if nobody ever reads, I can be perfectly alright with that too.

View all my reviews
- December 04, 2016
Email ThisBlogThis!Share to TwitterShare to FacebookShare to Pinterest
Labels: on reading, on writing

How to Read 9 Books in a Year: 10 Minutes Daily (No Speed-reading required) 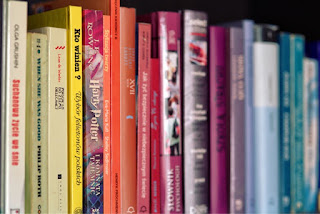 Why does it take so long to finish a book?
The most common answer I get is “Distraction”.

Why do we get distracted?
Mostly because we think that other things are more gratifying than reading.
Compared to the shallow instantaneous gratification we get from the things that distract us, trying to finish a book seems too big an investment to make.

How 10 minutes are enough

How to Read 9 Books in a Year
Nine stories, man.

You know what it's like to finish reading 9 novels?

It’s like having 9 extra lives added into your frame of mind. Like having 9 loyal friends to accompany and advise and feel you. These friends will always be with you, regardless to internet connection and popularity.

Better than getting likes on Facebook, the pleasure we get from reading a good fiction novel is constant.

And you don’t even have to be nice to them. You only need to turn off the internet for 10 minutes every day. (Dare you?)

Need to get gratified quick?

Here's a list of famous novels organized by word count (a lot are shorter than the Philosopher’s Stone).

Go ahead, read the shortest ones and finish fast. See how you'll like it.

Then, if you please, add me on Goodreads.

- January 21, 2016
Email ThisBlogThis!Share to TwitterShare to FacebookShare to Pinterest
Labels: on reading

Amrush was thinking about how much force it would take to veer the planet off its course.

It took a scale of 9 richter for an earthquake to wiggle Earth off her axis. How many atomic bombs does it take to make an earthquake as big as the one in 2005?

This brought into perspective the amount of force it would take to bring Jakarta out of her usual mechanisms. Much less to bring her down to her knees.

The underline is this: Jakarta is just too fucking big.

Taking it from the population’s perspective only, if we brought everyone in Saudi into an area size as big as Jeddah, Makkah and Medina combined, then we might have one Jakarta.

Say that somebody blew up the NCB building in Balad. How much would that effect the day-to-day mechanisms in the Holy Mosques, in your mama’s kitchen, in Elena’s kindergarten?

Say that the entire South side of Jeddah was submerged in flash floods. How much would it give effect on the people in the North, in Basateen, Naeem and airport districts?

The answer to both hypothetical questions? Not much.

Once that part is done and over with, we take a step back a look at it from a wider perspective. How big is the damage, really?

Sarinah’s incident doesn’t reach Cideng, Tanah Abang, or Palmerah. It doesn’t reach Blok M, TIM, Kelapa Gading, Senayan, Kota Tua or Tanjung Priuk. Each of those districts is a Sarinah by its own right. Every square meter of Jakarta is covered with so much life that it’d take a global monetary crisis to force her to a stop.

Say that a terrorist attack causes worse traffic jams than the usual. So, would it be like the traffic jams in 2007 or in 2012?
My point is, it would take a lot more than a ten, twenty or a hundred terrorists to cause a serious hiccup in Jakarta.

Which brings me to this nagging question: What are those idiots thinking?

Who manages and leads these terrorist attacks? What level of education has he gotten? If they’re so effective at being leaders, why couldn’t they think of a better plan? If the plan was to scare the people of Jakarta, then it’s not working. If the plan was to cause a systematic imbalance, then it’s not working. It wouldn’t work with the size of Jakarta, the size of Indonesia.

And the drones who follow them, how could they entrust their lives on leaders with chronic shortsightedness?

Unless stupidity really is that prevalent and there’s no way to cope with it but with a personal moment of dedicated facepalm. “Guoblognyaaa manusia…”

I've never been a terrorist, so I can't really offer insight to how it feels to being one. But I can relate to how it feels to be misunderstood. And I'd love if anyone could shed a light on the inner tick-tocks of a man who thinks that he can cause a glitch in a town as gargantuan as the Big Duren. Seriously. Comments box is yours to fill.